Summary: Infectious salmon anemia (ISA) is a disease of Atlantic salmon caused by an orthomyxovirus. It was first isolated in Norway in 1984, and has since been found in Canada and Scotland. Currently, the eastern most Maine salmon pen sites are within a 3 mile radius of one of the most recently infected Canadian pens. Because of the significant impact ISA has on production and the unknown benefits from vaccination, the impact to the local Maine economy from decreased production could be significant. Economic impact outside of the local area in Maine is likely to be minimal. 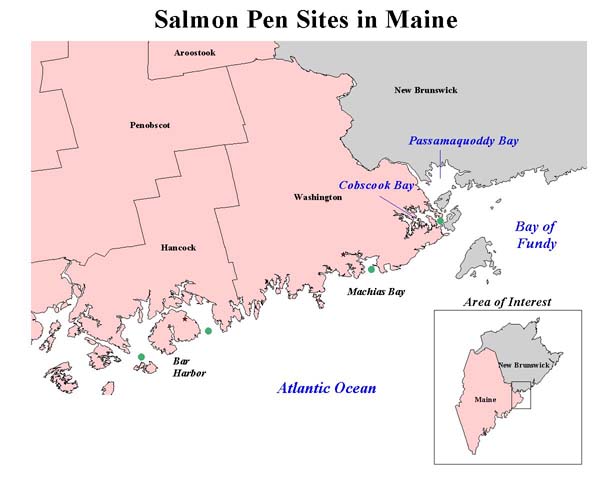 How extensive is the situation?

Infectious salmon anemia (ISA) is a disease of Atlantic salmon caused by an orthomyxovirus. While this virus appears to only cause disease in Atlantic salmon, both wild and farmed, it can also infect the sea run brown trout, rainbow trout and other wild fish such as herring. Since its first isolation in Norway in 1984, it has also been found in New Brunswick, Canada in 1996, Nova Scotia in 1998, and in Scotland in 1998. ISA may also be called hemorrhagic kidney syndrome (HKS) in Atlantic salmon.

Clinical signs of ISA generally appear 2 - 4 weeks after infection and include lethargy, swelling and hemorrhaging in the kidney and other organs, protruding eyes, pale gills, darkening of the posterior gut, and swelling of the spleen. Mortality is highly variable and can be from 2 to 50% over one production cycle, depending on stocking density, sea lice status, etc. Transmission occurs by direct contact, through parts from infected fish (mucus, blood, viscera, trimming, feces), contact with equipment contaminated with parts from infected fish, people who handled infected fish, and sea lice. Salmon pens within approximately 3 miles of infected farms or processing plants handling infected fish without adequate waste treatment have up to 13 times greater risk of becoming infected with ISA.

Although ISA had spread no more then 15 miles from the initial site of infection in 1996 in New Brunswick, the entire salmon farming industry in the Bay of Fundy area (including Maine) exists within a 25 mile radius. The eastern most Maine salmon pen sites are now within a 3 mile radius of one of the most recently infected Canadian pens.

Risk factors for ISA infection are thought to include the following: proximity of less than 5 km to a processing plant, exposure to sub-optimally treated effluent from processing plants and blood water from harvesting operations, improper handling and disposal of dead and dying fish, farm personnel and divers working at more than one site, movement of equipment among marine sites and processing sites.

The Canadian aquaculturists in New Brunswick began vaccinating smolts with an autogenous vaccine in the winter of 1998. This vaccine requires 700 degree days (water temperature) to acquire protection from ISA. This means that with an average water temperature of 10 degrees it would take 70 days for immunity to develop. Thus the fish vaccinated in the winter of 1998 may not have acquired protection before they were exposed to the virus. Even with this limitation, all aquaculturists in New Brunswick have chosen to vaccinate the fish in their 1999 year class smolts. These smolts will go into new or 6 month fallow sites in most cases. For these reasons, it may be difficult to determine the efficacy of vaccination use.

Scotland salmon farms became infected with ISA in 1998, and adopted a compulsory slaughter regime with a zone surrounding infected farms within which all farms must fallow (not stock) their pens for 6 months. This regime would be more difficult to follow in the Maine/New Brunswick region since the pens are geographically close to one another. A fallow zone around the currently infected pens would include a significant proportion of operations in the region, and could devastate the industry. Four Canadian areas have already been fallowed and repopulated: Bliss, Limekiln, Back, and Seal. Sources: U of Maine; Cooperative Extension Info Bullet, Summary Report of Meetings with Maine's Department of Marine Resources and Microtechnologies, Inc., regarding Infectious Salmon Anemia Threat to Maine's Farmed Salmon Industry, World Aquaculture; March/April 1999, and Drs. Steve Ellis, and Donald Hoenig. 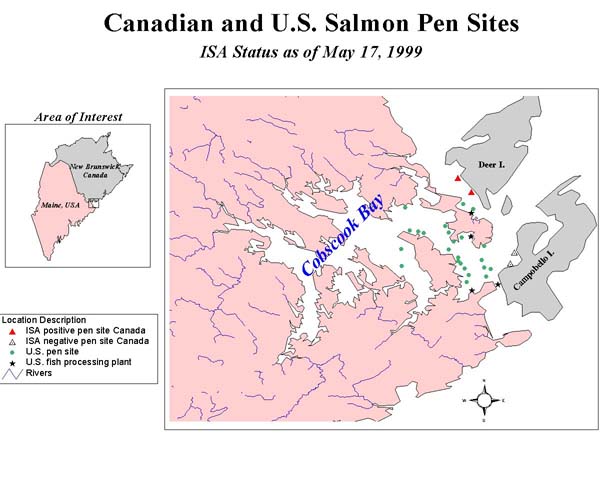 What is the US' place in the international market for affected animals and animal products?

Internationally, the US is the world's largest exporter of seafood. US companies, in 1997, exported 2.0 billion pounds of seafood valued at $2.7 billion to Japan, the EU, Canada, and other countries to a lesser extent. Of the exported seafood, salmon was the most valuable product, comprising about 25% of total exports by value.

What is Maine's production and trade in affected animals and animal products?

The Maine aquaculture industry has grown dramatically in the past decade. In 1988 the harvest collected approximately 1 million pounds of salmon and trout at 10 sites, while just four years later this had grown to 10 million pounds of harvested salmon alone. This growth in Maine mirrors growth of the industry worldwide. Farmed salmon production worldwide increased from 47,000 tons to 550,000 tons during the years from 1985 to 1995.

Maine accounts for 18% of the US domestic salmon market. Within the state of Maine, the salmon industry provided close to 1000 jobs directly or indirectly in 1996. The vast majority of these jobs are in Washington County (see map 1). The industry was estimated in 1996 to be responsible for nearly $30 million of personal income and $44 million of goods and services produced in Maine (gross regional product). In 1998, the Maine salmon industry had an estimated economic value of $60 million. For comparison, the Maine dairy and potato industries each had an estimated economic value of $90 million in 1998.

The high rate of growth in the farmed salmon industry and the competitive pressure from large salmon producing countries has forced firms on both the Canadian and Maine side of the border to become larger, and more integrated. This expansion has caused firms to have operations on both sides of the border. It is common for smolts, farmed fish, feed, processing workers, investment capital, and information to travel across the border in both directions.

What are the U.S. exports of affected animals or animal products?

It appears inevitable that ISA will arrive at US pen sites in the near future. Doubts remain only as to the methods which will be used to minimize the effect this will have on the Maine salmon farming industry. It will not be feasible to consider the Maine salmon operations without also taking into consideration the Canadian side of this industry, since they are both geographically and economically related. Because of the significant impact ISA has on production and the unknown benefits from vaccination, the impact to the local economy from decreased production could be significant. Economic impact outside of the local area in Maine is likely to be minimal.

CEI will continue to monitor the situation in the Bay of Fundy, and should it change or as more information (such as effect of vaccination) becomes available, an update will be issued. Please contact Victoria Bridges (970) 490-7822 or Katherine Marshall (970) 490-7801 with any questions or comments.

Prepared by: Center for Emerging Issues, Centers for Epidemiology and Animal Health