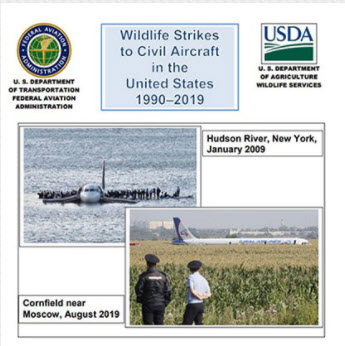 Wildlife Strikes to Civil Aircraft presents a summary analysis for the 30-year period, 1990 through 2019. The 2019 total of reported wildlife strikes showed an increase of 1,007 wildlife strikes (6 percent) compared to 2018. The number of wildlife strikes annually reported has increased more than 9-fold from 1990 to a record high of 17,228 in 2019. Wildlife strike reporting is vital to managing safety for both aviation and avian species. The FAA and Wildlife Services, which assists with strike avoidance at more than 890 airports throughout the country, agree that the problem of wildlife hazards cannot be fully addressed without knowing the species of wildlife involved.

Although overall numbers of reported strikes continue to rise, those causing damage have increased only slightly since 2010 and are still below the record number in 2000. Damaging strikes declined 4 percent between 2000 and 2019, from 743 to 710. This decline has been most pronounced for commercial aircraft in the airport environment (at <1,500 feet above ground level) but has not declined for general aviation. 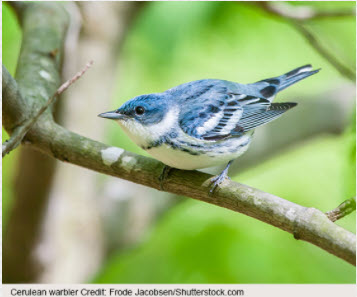 Management actions conducted by airports and their biologists to mitigate the risk have been implemented at many airports since the 1990s. These are likely responsible for the reduction in damaging strikes or those with a negative effect-on-flight at passenger-certificated airports between 2000-2019 despite continued increases in populations of many large bird species. Wildlife Services provides a wide range of technical and direct management assistance at airports and military airbases, domestically and overseas. Its National Wildlife Research Center scientists conduct research that provides a scientific foundation for management programs. (Protecting the Flying Public, FY19.)

Strikes occur every day, but when compared to the total number of flights they are rare. Although eliminating all strikes at all times may be impossible, comprehensive assessment, planning and management techniques have successfully mitigated damaging strikes on or near airports. Combined with systematic evaluation and adaptation of techniques, safety can be increased.

Identifying the bird species involved in a wildlife strike is critical information for addressing aviation strike hazards. When a bird carcass isn’t available, airport or airline personnel or airport biologists collect any biological remains, known as “snarge”. They can send the snarge to the Smithsonian Institution Feather Lab, which in turn can identify bird and other wildlife species through morphological and DNA analyses.

In 2020, Wildlife Services and the Feather Lab authored a report marking a milestone in the National Wildlife Strike Database (NWSD).--USDA APHIS | National Wildlife Strike Database Records 600th Bird Species Struck by Aircraft. Through this report, Wildlife Services and the Smithsonian Feather Lab explain the identification of a single bird that represented that 600th species listed in the database. Determined to be a cerulean warbler (Setophaga cerulean), the remains brought the number of New-World wood warblers (family Parulidae) entered in the NWSD to 40 species.

In this strike event involving the cerulean warbler, neither the airport nor biologists could have reduced chances of the collision which likely occurred during nighttime migration. However, knowing about the strike underscores one of the obstacles birds face during annual migration cycles. It also demonstrates the applicability of the information available in the NWSD to disciplines beyond aviation, such as ornithology.