At an Eradication Crossroads
In the early 1970s, USDA’s progress in eradicating screwworm—among the deadliest and most vicious of livestock pests—was at a crossroads. Department scientists had revolutionized the country’s battle against the insect by creating a new technology. The concept was simple yet profound: rear and aerially distribute masses of sterile screwworm flies in infested areas, so the resident fly populations would have increasing difficulty reproducing—and eventually breed themselves out of existence. The new approach worked so well that by 1966, USDA declared screwworm eradicated within U.S. borders.

But borders are porous, and in 1972, geography and warm, moist weather combined to spawn an aggressive resurgence of screwworm cases. California, Arizona, New Mexico, Texas, Oklahoma, and Arkansas all reported screwworm-infested livestock. Particularly vulnerable was Texas, which confirmed 90,000 cases after reporting only 444 in 1971. Eradication was proving impossible to maintain. 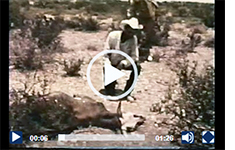 The agreement called for detailed cooperation on achieving an ambitious goal: eradicating screwworm all the way down to Mexico’s narrowest point, the Isthmus of Tehuantepec. The agreement named APHIS—inaugurated only months before—as USDA’s lead agency in the effort.

Among COMEXA’s many projects was a plant for rearing sterile screwworm flies in Mexico itself. Built near Tuxtla Gutierrez, the plant opened in 1976. It eventually produced hundreds of millions of sterile flies every week.

In addition to conducting field operations, APHIS and its partners launched vigorous public education efforts. The "Mission '77: Stamp Out Screwworms" campaign increased producer participation and, coupled with new technologies and favorable weather, yielded great results. In 1977, there were only 39 confirmed screwworm cases in Texas.

Mission Accomplished
Although the battle against screwworm would be waged for many years, it eventually became one of APHIS’ most resounding success stories. By 1991, the pest had finally been eradicated throughout Mexico. APHIS and various international partners ended up advancing the screwworm barrier all the way south to Panama’s Darien Gap, where it remains today. APHIS quickly and aggressively combated a screwworm outbreak that was confirmed in the Florida Keys in October 2016. The Agency announced eradication in March 2017.

COMEXA’s commissioners met for the last time on October 5, 2012—after 40 years of challenges and achievements—to declare their mission accomplished.

Want to learn more? Check out the “APHIS in its First Decade” StoryMap.