In the mid-1990s, thousands of cattle in the United Kingdom (UK) were affected by an outbreak of a fatal neurological disease, bovine spongiform encephalopathy (BSE), commonly referred to as “mad cow disease.” Concern grew when it was discovered that some people who had eaten meat from infected cows had gotten a version of the disease called new variant Creutzfeldt-Jakob disease (nvCJD).

BSE, which is invariably fatal, is caused by a malformed protein that is not neutralized by high heat or other measures commonly used to kill bacteria, viruses, or other organisms. As a result of the UK outbreak, imports of British beef were banned from the United States and other countries.

However, in May 2003, the first North American case of BSE was reported in Alberta, Canada, sending shockwaves through the highly integrated North American beef supply chain. The United States, along with many other countries around the world, immediately closed its border to Canadian beef and cattle. 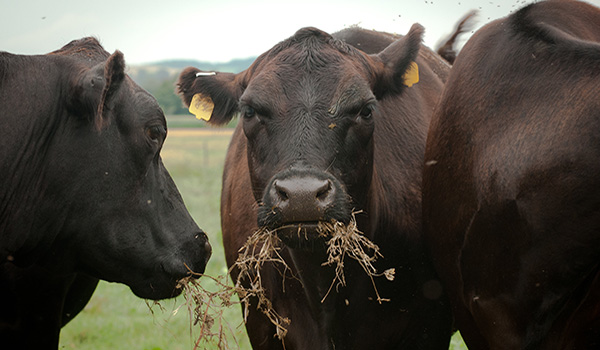 The Cow That Stole Christmas
Despite the import bans, in late December 2003, APHIS confirmed the first U.S. case of BSE in a dairy cow that had been imported from Canada to Washington State. The ‘cow that stole Christmas,’ as then Veterinary Services Deputy Administrator Dr. W. Ron DeHaven put it, sent the agency into full-on emergency mode. Holiday plans were canceled, and hundreds of APHIS employees were mobilized to determine the source of the disease, ensure that no animals from the affected herd had entered the food supply, and—along with other USDA agencies and the Food and Drug Administration—implement new prevention and surveillance measures.

APHIS Administrator Bobby Acord ably managed stakeholder relations during early days of the emergency, establishing new outreach practice, such as regular calls with the National Association of State Departments of Agriculture. Other employees were involved in formulating new public policy or trying to assuage public concern and explain the complicated science involved. This included the fact that BSE is not contagious in the traditional sense, that the disease is mainly transmitted through feed and may lie dormant in the nervous system for many years, and that there are no simple “food safety” tests to detect BSE in meat or other products. Rather, it was necessary to find and test those cattle most likely to have the disease, a process called “targeted surveillance.”

APHIS Rises to the Challenge
In response to the first U.S. BSE detection, many countries stopped importing U.S. beef. After APHIS launched its enhanced surveillance program, the Agency tested nearly 1 million animals. The data indicated the prevalence of BSE in the United States was very low—less than 1 infected animal per million based on a population of 42 million adult cattle. APHIS and USDA’s Food Safety and Inspection Service also implemented further preventive measures, including blocking certain cattle from entering the food chain, removing and destroying certain organs, and restricting certain meat collection methods that were thought to present a risk.

These measures were successful and helped support restored trade of U.S. beef. From 2003 to 2018, only 26 BSE cases were found in North America, just 6 of which were detected in the United States. Moreover, the United States never recorded a human case of BSE.

In October 2004, APHIS Administrator Ron DeHaven and VS’ Dr. Lisa Ferguson celebrate the work of the BSE enhanced surveillance program.

In 2013, the World Organisation for Animal Health upgraded the United States to negligible risk status for BSE, the highest status available. Today, most countries that previously prohibited U.S. beef due to BSE have removed those restrictions. Even better, the incidence of BSE worldwide has plummeted. By 2011, only 29 cases were detected worldwide.

Despite the COVID-19 pandemic and issues with the international and domestic supply chains, the United States remains the world’s largest beef producer and second-largest exporter. APHIS’ efforts were critical to quickly facing and overcoming the BSE crisis, and—as in so many other ways—safeguarding American agriculture.

Want to learn more? Check out the “Securing the Homeland: APHIS in the 2000s” StoryMap.