That day Helene Wright, the California State Plant Health Director for APHIS’ Plant Protection and Quarantine (PPQ) program, was on a plane taxiing out for takeoff from Ronald Reagan Washington National Airport. It was a beautiful Tuesday morning. Suddenly all planes were grounded, and Helene and her fellow travelers were ordered back to the terminal. They were told a plane had hit the World Trade Center in New York City. Then they heard a plane hit the Pentagon in Arlington, Virginia—only a few miles away. Helene looked out to see smoke rising. She and the other passengers were quickly ordered off the plane and out of the terminal. There was no public transportation running at the airport, so they all started walking in stunned silence. It was eerily quiet.

When Helene got back to her hotel hours later, she—along with countless other Americans—couldn’t believe what she saw unfolding on the news. Terrorists had hijacked four commercial airplanes, deliberately crashing two into the World Trade Center complex in New York, and one into the Pentagon. Later, news outlets reported that passengers on the fourth plane, Flight 93, had fought back after learning about the other attacks and crashed outside Shanksville, Pennsylvania. Altogether, the attacks killed 2,977 people from 93 countries. 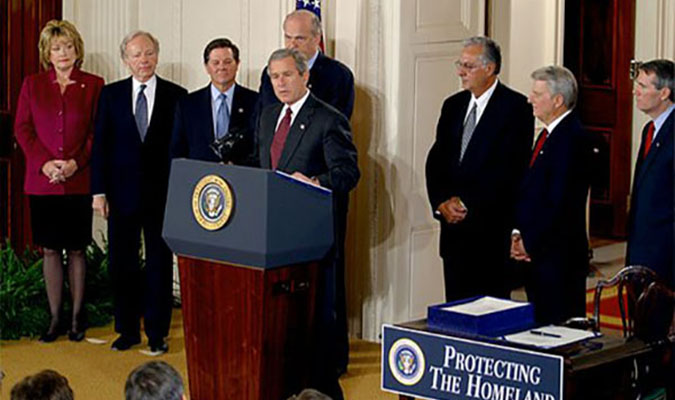 President Bush addresses the media during the signing of the Homeland Security Act on November 25, 2002. White House photo by Paul Morse.

Only days after the terrorist attacks, President George W. Bush established the White House Office of Homeland Security and Homeland Security Council to ensure that Federal response and protection activities were coordinated and effective. With the passage of the Homeland Security Act in November 2002 (Public Law 107-296), Congress created the Department of Homeland Security (DHS) to further coordinate and unify national homeland security efforts. DHS opened its doors on March 1, 2003. It integrated all or part of 22 different Federal departments and agencies, including APHIS’ agricultural quarantine inspection (AQI) employees at 157 ports of entry.

PPQ was no longer the first line of defense for inspecting incoming international travelers and commercial cargo, although the program still retained its authority for regulating agricultural imports and conducting AQI training and Plant Inspection Station activities. In the beginning, both APHIS and Customs and Border Protection (CBP)—which had absorbed the AQI inspectors—struggled to keep the agricultural mission at the forefront in DHS.

Things began to turn around with the creation of a CBP Executive Director to oversee agricultural inspections at the national level and the creation of CBP ag liaisons in the field. PPQ also formed Pest Risk Committees (PRC) at ports of entry to enhance communication between the remaining APHIS employees and CBP. PPQ program officials asked CBP officers to participate in PRC intensive operations each month, which garnered additional support from DHS management. This, in turn, created interest among other local Federal, State, and county agricultural agencies to become PRC members, increasing the effectiveness and credibility of these operations. 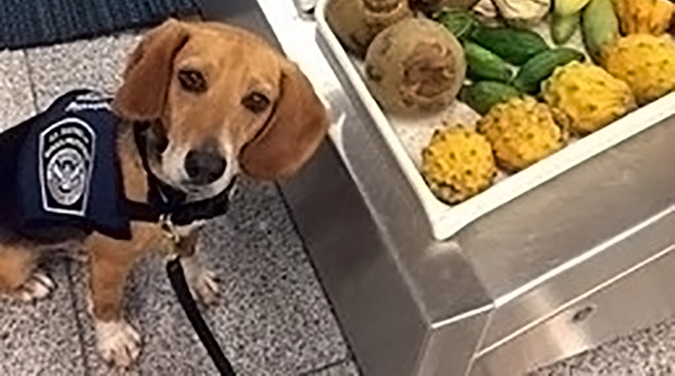 Murray, a Beagle Brigade member, with prohibited, imported food he found at Hartsfield-Jackson Atlanta International Airport. APHIS continues to train the Beagle Brigade, and CBP uses the dogs for AQI inspections at ports throughout the country.

Almost 20 years later, there are more eyes now on the ag mission than there were prior to DHS taking over the AQI function, and PPQ and CBP continue to work effectively together to protect U.S. agriculture.

Want to learn more? Check out the “Securing the Homeland: APHIS in the 2000s” StoryMap.