Laboratory animal welfare was a concern for Americans even before the news told the story of Pepper, a family’s dog that was stolen and died at a research facility. That event galvanized the public and prompted legislative action to pass the Laboratory Animal Welfare Act of 1966 (now the Animal Welfare Act). In 1985, research animals again were a focal point of public and Congressional interest.

Senator Bob Dole Advocates for Research Animals
After U.S. legislators introduced several bills regarding animals in research in the early 1980s, Senator Bob Dole (1923-2021)—a long-time animal welfare advocate—included the Improved Standards for Laboratory Animals Act in the 1985 Farm Bill. After the bill passed, President Ronald Reagan signed it into law on December 23, 1985. 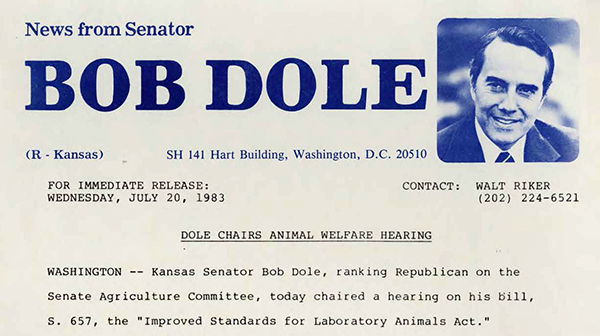 The changes to the AWA were major, including:

APHIS Rulemaking and a New Program
The bill also strengthened penalties for AWA violations. In early 1986, APHIS began the complex rulemaking effort to implement the new law by soliciting information from the public for drafting proposed regulations and standards. The final regulations in 1989 drew on thousands of public and stakeholder comments, as well as APHIS’ years-long consultations with the U.S. Department of Health and Human Services and other Federal agencies concerned with animal welfare issues.

The establishment of Regulatory Enforcement and Animal Care in 1988 as a separate unit within APHIS raised the visibility of the Agency’s animal welfare enforcement initiatives and enabled the program to better focus resources on this important mandate. At the time, more than 1.6 million animals used in experimentation were regulated under the AWA. By fiscal year 2021, that number had gone down to 1.073 million animals.

Want to learn more? Check out the StoryMap “From Beagles to Biotech—APHIS in the 1980s.”