USDA Conducts Field Trials in 5 States of New Oral Rabies Vaccine for Use in Raccoons, Other Wildlife


WASHINGTON, Aug. 11, 2014—The U.S. Department of Agriculture’s Animal and Plant Health Inspection Service (APHIS) will conduct a third U.S. field trial of a vaccine to control rabies in raccoons, skunks, and other wildlife beginning this month in four states.  A trial focused on skunks and an alternative baiting strategy will be carried out in a fifth state.

The field trial by APHIS’ Wildlife Services program again will distribute more than one million oral rabies vaccination (ORV) baits in Vermont, New Hampshire, New York, and Ohio, to test the safety and immune effects of the ONRAB vaccine for potential use in wildlife. The ONRAB vaccine is currently used in Canada to control rabies in raccoons, skunks and foxes.  The vaccine was field tested in the U.S. for the first time in West Virginia during 2011, and promising results warranted expanded testing of the vaccine into four additional states during 2012-2013.

To evaluate potential annual variation, the 2014 proposed field trials in New Hampshire, New York, Ohio, and Vermont will repeat the 2012-2013 studies.  An environmental assessment process leading to the expansion was finalized for all years of the trials.

Wildlife Services works cooperatively with local, state and federal governments, universities and other partners to reduce the prevalence of rabies in wildlife by distributing ORV bait in targeted areas. The bait currently used in ORV programs has proven to be effective in raccoons, coyotes, and foxes. It has not produced sufficient levels of immunity to begin to eliminate raccoon rabies and it has performed poorly in skunks under field conditions.

“Skunks infected with the raccoon rabies virus may be helping to perpetuate and maintain the raccoon rabies virus in the environment,” said Richard Chipman, Coordinator for the Wildlife Services National Rabies Management Program. “If the ONRAB bait can be applied to successfully vaccinate skunks as well as increase the vaccination rate in raccoons and maintain the rates in foxes and coyotes, it could greatly improve the overall effectiveness of our rabies control programs.”  The original West Virginia field trial was completed between 2011-2013.  In 2014, a separate study will be conducted in West Virginia to further evaluate ONRAB by specifically targeting skunks using an alternative baiting strategy.

Wildlife Services personnel will sample raccoons and skunks in the study areas both prior to and immediately following bait distribution to determine vaccination rates. The field trials are a collaborative effort among APHIS-Wildlife Services, APHIS-Center for Veterinary Biologics, the Centers for Disease Control and Prevention, the vaccine manufacturer (Artemis Technologies, Guelph, Ontario, Canada), and state departments of agriculture, health and human resources, and natural resources.

Humans and pets cannot get rabies from contact with the bait, but are asked to leave the bait undisturbed if they encounter it. If contact with bait occurs, the contact area should be immediately rinsed with warm water and soap.  Each bait contains a toll-free number that people can call if they have additional questions concerning a bait contact.

The cooperative Wildlife Services National Rabies Management Program was established in 1997 to prevent the spread of wildlife rabies in the United States by containing and eventually eliminating the virus in terrestrial mammals and focuses efforts on controlling rabies in raccoons, gray foxes and coyotes.

Rabies is a serious public health concern.  If exposures to the virus are not treated it is almost always fatal.  Costs associated with detection, prevention and control of rabies exceed $300 million annually in the U.S.  According to the Centers for Disease Control and Prevention, about 90 percent of reported rabies cases in the U.S. are in wildlife. 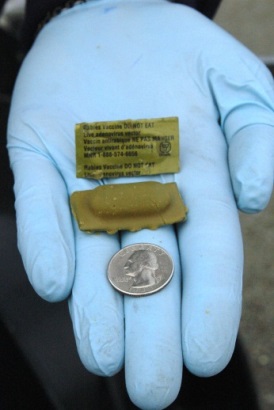