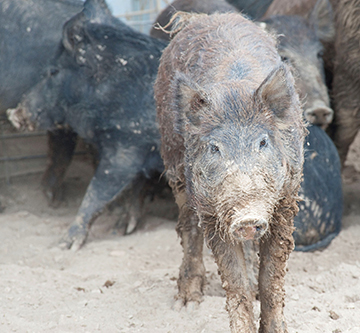 WASHINGTON, April 2, 2014 — Undersecretary for USDA’s Marketing and Regulatory Programs Edward Avalos announced today that USDA is kicking off a national effort to reduce the devastating damage caused by feral, or free ranging, swine.  The $20 million program aims to help states deal with a rapidly expanding population of invasive wild swine that causes $1.5 billion in annual damage and control costs.

“Feral swine are one of the most destructive invaders a state can have,” said Undersecretary Avalos.  “They have expanded their range from 17 to 39 states in the last 30 years and cause damage to crops, kill young livestock, destroy property, harm natural resources, and carry diseases that threaten other animals as well as people and water supplies. It’s critical that we act now to begin appropriate management of this costly problem.”

The Wildlife Services (WS) program of USDA’s Animal and Plant Health Inspection Service (APHIS) will lead the effort, tailoring activities to each state’s circumstance and working closely with other Federal, State, Tribal, and local entities. WS will work directly with states to control populations, test animals for diseases, and research better methods of managing feral swine damage.  A key part of the national program will include surveillance and disease monitoring to protect the health of our domestic swine.

Feral swine have become a serious problem in 78% of all states in the country, carrying diseases that can affect people, domestic animals, livestock and wildlife, as well as local water supplies. They also cause damage to field and high-value crops of all kinds from Midwestern corn and soybeans to sugar cane, peanuts, spinach and pumpkins.  They kill young animals and their characteristic rooting and wallowing damages natural resources, including resources used by native waterfowl, as well as archeological and recreational lands.   Feral swine compete for food with native wildlife, such as deer, and consume the eggs of ground-nesting birds and endangered species, such as sea turtles.

“In addition to the costly damage to agricultural and natural resources, the diseases these animals carry present a real threat to our swine populations,” said Avalos.  “Feral swine are able to carry and transmit up to 30 diseases and 37 different parasites to livestock, people, pets and wildlife, so surveillance and disease monitoring is another keystone to this program.”

As part of the national program, APHIS will test feral swine for diseases of concern for U.S. pork producers, such as classical swine fever, which does not exist in the United States, as well as swine brucellosis, porcine reproductive and respiratory syndrome, swine influenza, and pseudorabies.  Ensuring that domestic swine are not threatened by disease from feral swine helps ensure that U.S. export markets remain open.

APHIS aims to have the program operating within 6 months and funding for the comprehensive project includes, among other things:
• $9.5 million for state projects
• $1.4 million for establishing procedures for disease monitoring, including the development of new surveillance and vaccination methods
• $1.5 million for WS’ National Wildlife Research Center to conduct research and economic analyses to improve control practices
• $1.6 million for the centralization of control operations, and for making them safer and more cost-effective

Note to Reporters:  USDA news releases, program announcements and media advisories are available on the Internet and through Really Simple Syndication (RSS) feeds.  Go to the APHIS news release page at www.aphis.usda.gov/newsroom and click on the RSS feed link.