WASHINGTON, Aug. 7, 2013 -- The U.S. Department of Agriculture's (USDA) Wildlife Services' (WS) National Wildlife Research Center (NWRC) today announced that the U.S. Patent Office has issued a patent (US 8,407,931 B1) to USDA for a live snake trap that utilizes two trip pans for the humane capture of larger, heavier snakes, such as the invasive Burmese python.  Each pressure trip pan has an independent release mechanism so that both must be depressed simultaneously in order to spring the trap, an important feature designed to reduce if not eliminate capture of nontarget animals. Called the Large Reptile Trap, this device was developed by a scientist at the NWRC Florida Field Station in Gainesville, Florida, in conjunction with Tomahawk Live Trap LLC.

“Though the trap is based on a standard live trap design, the Large Reptile Trap is the first to require two trip pans to be depressed at the same time in order to close the trap door. The pans are spaced such that non-target animals are unlikely to trigger the trap,” said NWRC wildlife biologist and trap inventor John Humphrey. “This trap was developed with the invasive Burmese python in mind. It capitalizes on their larger length and weight.”

The Burmese python is an invasive species that has become well established in southern Florida. In some locations, it has become a top predator that feeds on native wildlife and out-competes native species. NWRC scientists and their partners are investigating new methods, such as the Large Reptile Trap, for monitoring and controlling invasive Burmese python and other non-native reptile populations in Florida. The USDA hopes to work with an interested company to manufacture the trap.

Invasive species are one of the leading causes of worldwide biodiversity loss.  The state of Florida unwillingly plays host to the greatest number of established non-native reptile species in the United States, due in part to the intentional or unintentional release of exotic species imported for the pet trade, as well as the State's subtropical climate and diminished competition from reduced populations of native species.  Nearly 1,000 Burmese pythons have been removed from the Florida Everglades National Park and surrounding areas since 2002 -- likely representing only a fraction of the total population of pythons in the State. If the python population continues to grow, it will likely have substantial impacts on native wildlife populations, with impacts potentially most pronounced on endangered and threatened species.

WS-NWRC is the Federal institution devoted to resolving problems caused by the interaction of wild animals and society. The center applies scientific expertise to the development of practical methods to resolve these problems and to maintain the quality of the environments shared with wildlife. To learn more about NWRC, visit its Web site at www.aphis.usda.gov/wildlife_damage/nwrc/.

#
Note to Reporters: USDA news releases, program announcements and media advisories are available on the Internet and through Really Simple Syndication (RSS) feeds. 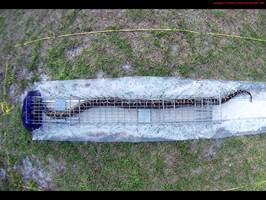 The newly patented Large Reptile Trap is designed to capture large snakes such as the invasive Burmese python. Photo by USDA Wildlife Services