The U.S. Department of Agriculture’s Animal and Plant Health Inspection Service (APHIS) received this year’s Presidential Migratory Bird Federal Stewardship Award, in recognition of the Wildlife Services program’s efforts to conserve large native migratory birds and protect people in Hawaii. The Council for the Conservation of Migratory Birds, led by the U.S. Fish and Wildlife Service and composed of many federal agencies with migratory bird responsibilities, chose the 2021 winner of the Presidential award in May. 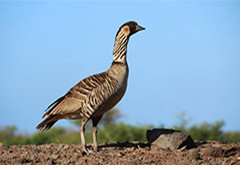 APHIS Wildlife Services conducted a joint research-operational project with the goal of reducing human-wildlife conflicts associated with two bird species of cultural significance: the Hawaiian goose, or nēnē, and the Laysan albatross, or mōlī. Because of their large size, both species pose a potential aircraft strike risk near airfields in some areas of Hawaii.

“By integrating research with management operations and working with federal, state and local partners, APHIS is helping to conserve and protect Hawaii’s treasured bird species,” said Secretary Vilsack. “Such efforts highlight what can be accomplished when we come together to solve difficult problems.”

Wildlife Services research and operations personnel collaborated with numerous partners not only to reduce aircraft strike hazards presented by these species, but also to identify, preserve, enhance, and support important breeding and foraging habitats for the birds elsewhere on the island.The project employed innovative nonlethal management tools, such as canine teams for dispersing birds, mitigation translocation, and egg swaps, and conducted research to gauge the impact and effectiveness of these tools, which will guide future management strategies.

“APHIS is honored to receive this prestigious award and thanks the Council for recognizing Wildlife Services’ efforts and commitment to migratory bird conservation while also protecting human safety and property,” said Janet Bucknall, Deputy Administrator of Wildlife Services. “We also want to thank our numerous federal, state and private partners who supported our efforts.”

Hawaiian Goose Project:
The once-endangered Hawaiian goose is the state bird of Hawaii and is now classified as threatened. In 1985, several birds raised as part of a captive breeding program were released on Kauai and almost immediately began visiting and nesting on a Kauai golf resort. Because the resort is situated between two runways for the island’s major airport, this created a danger to the birds and air traffic. The State of Hawaii, Department of Transportation (H-DOT) and the Department of Land and Natural Resources (DLNR) Division of Forestry and Wildlife (DOFAW) partnered with Wildlife Services to capture and translocate more than 600 Hawaiian geese on Kauai to other Hawaiian islands. When translocation efforts ended in 2016, nesting goose numbers and concerns began to increase again. In 2019, H-DOT collaborated with Wildlife Services to implement an innovative nonlethal program that uses trained border collies to disperse the birds away from the resort near the airport. Within the first few weeks of the program, goose presence on the resort decreased and became sporadic. In conjunction, WS biologists live captured and attached satellite transmitters to 10 adult male geese to follow their movements in response to the dispersal efforts. More than two years of tracking data has provided unprecedented understanding of the birds’ annual movements and habitat use and identified other areas of Kauai that appear to be critical for the geese during the non-breeding season.

Laysan Albatross Project:
Laysan albatross, the Pacific region’s second-largest seabird, commonly return to the same site for breeding and nesting year after year. Since the 1970s, nesting Laysan albatross have frequented a naval airfield on the island of Kauai, creating hazardous conditions for both birds and military aviators. The U.S. Navy’s Pacific Missile Range Facility (PMRF) began partnering in the 1980s with Wildlife Services to reduce wildlife hazards at the facility including the relocation of adult Laysan albatrosses. Since 2009, Wildlife Services has collected more than 600 albatross eggs, transferring them to conservation partners with expertise in raising eggs to hatching and helping albatross chicks establish nesting colonies in more suitable habitats. The partners hoped that the fledged albatross chicks eventually would return to the adopted nesting site. In 2018, the first albatross, which had hatched at an egg swap location, returned to its adopted site after three years traveling around the Pacific Ocean. Wildlife Services research efforts began in 2018 and use radio-tracking technologies to determine the most effective methods for reducing albatross presence on the PMRF and increasing aviation safety. Research findings provide evidence that mitigation translocation within island ecosystems can benefit both humans and birds.

For more information on these and other Wildlife Services aviation projects, please visit:

The Council for the Conservation of Migratory Birds, which is supported by the U.S. Fish and Wildlife Service, includes representation from the Departments of the Interior, State, Commerce, Agriculture, Transportation, Energy, Defense, and the Environmental Protection Agency and is open to all Federal agencies whose activities may directly or indirectly affect migratory bird populations. The award recognizes significant contributions to the implementation of Presidential Executive Order 13186, which created the Council. 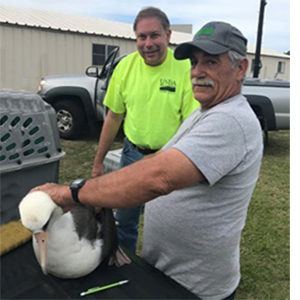 USDA-APHIS Wildlife Services worked with numerous partners to implement novel management techniques, such as canine teams for dispersing Hawaiian geese and mitigation translocation of Laysan albatross, to help protect the species and the flying public from potential bird-aircraft collisions.