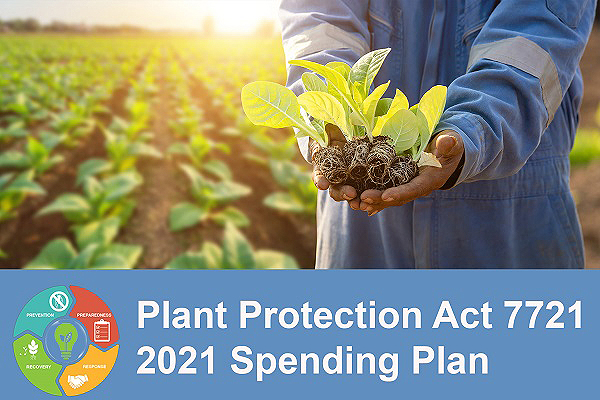 WASHINGTON, January 5, 2021 – The U.S. Department of Agriculture (USDA) is allocating almost $60,000 to Nebraska from Section 7721 of the Plant Protection Act as part of its effort to strengthen the nation’s infrastructure for pest detection and surveillance, identification, and threat mitigation, and to safeguard the U.S. nursery production system.  Overall, USDA is providing more than $70 million in funding this year to support 383 projects in 49 states, The District of Columbia, Guam, and Puerto Rico. USDA provides this funding under the authority of the Plant Protection Act Section 7721.

“Nebraska has more than 45,000 farms and ranches—making up about 92% of the State’s total land area. One in four jobs in Nebraska depend on its agriculture. Protecting its agricultural industry is critical,” said USDA Under Secretary Greg Ibach. “These projects will help Nebraska protect its resources and contribute to USDA’s mission of keeping our nation’s agriculture economy strong.”

The Nebraska Department of Agriculture (NDA) will survey for nursery pests that can cause significant economic damage to nursery stock, for cyst nematodes in soil and for the khapra beetle--one of the most destructive pests of stored grain.

Imported products introduce the risk of invasive plant pests which can affect nursery and commercial agricultural production.  The NDA will conduct surveys for invasive nursery pests at locations across the State.  Pest-free results will assist nursery stock producers to maintain their pest-free status and ability to produce and distribute nursery stock nationwide.

If international trade led to the khapra beetle being introduced and established in the United States, it would cause significant economic damage.  Regular surveys are essential for early detection and, if found, a coordinated rapid response would be equally vital. NDA will work with USDA to identify and focus on international markets with the potential to bring in khapra beetle-host materials and will use the information to support continued foreign market access for Nebraskan agricultural products.

Following detection of the potato cyst nematode in Idaho in 2006, continuous surveys became necessary for Nebraska to maintain and expand foreign market access for the State’s potatoes. While many of the foreign markets that were closed to U.S. potatoes after the discovery of this pest have since reopened, continued vigilance is necessary. NDA will survey potato production areas in the State following procedures and protocols USDA set to show the State’s commitment to maintaining pest-free areas. USDA funds will also support academic research in Nebraska to enhance diagnostics for cyst and root-knot nematodes.

Since 2009, USDA has supported nearly 4,000 projects and provided more than $670 million in funding.  Collectively, these projects allow USDA and its partners to quickly detect and rapidly respond to invasive plant pests and diseases. These projects also help our country maintain the infrastructure necessary to ensure disease-free, certified planting materials are available to U.S. specialty crop producers.

As the United States and the world recognize the International Year of Plant Health through June 2021, this funding highlights USDA’s continued commitment to safeguarding our agricultural resources for current and future generations.