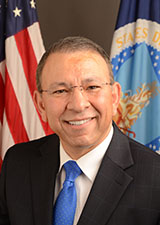 WASHINGTON, December 23, 2021 – Dr. Osama A. El-Lissy, Deputy Administrator of the U.S. Department of Agriculture’s (USDA) Animal and Plant Health Inspection Service (APHIS) received the 2021 Presidential Rank Award for Meritorious Executive. The Presidential Rank Awards recognize a select group of senior career employees for their significant national and/or international achievements. It is one of the highest awards given to federal professionals by the President of the United States.

“I am honored to receive the Presidential Rank Award,” said Dr. Osama El-Lissy, who leads the agency’s Plant Protection and Quarantine (PPQ) program. “This achievement reflects the hard work of APHIS employees who are committed to doing all we can to protect American agriculture from pests and diseases.  Every day, we safeguard our resources against pests that threaten our nation’s food crops, farms, and forests and we open new overseas export markets for American agricultural products.  I’m proud of our mission to ensure the viability of agriculture and natural resources in the United States and around the world.”

Together with his nationally and internationally dispersed staff, Dr. El-Lissy negotiated plant health requirements for the trade of U.S. agricultural exports valued at $137 billion annually, recently achieving new market access for U.S. commodities worth over $1.5 billion, including exports to China under the Economic and Trade Agreement. As a result of his efforts, the U.S. achieved trade access for U.S. products to China resulting in an export gain valued at $800 million. This included barley grain valued at $660 million, horticultural products valued at $97 million; and animal feed, valued initially at $10 million.

Dr. El-Lissy plays a major role in protecting existing U.S. markets too, especially when faced with challenges that could jeopardize exports. He took immediate action to protect soybean exports to China, valued at $12 billion, after concerns were raised about weed seeds, and he protected corn exports, valued at $6.3 billion, from trade disruption when a new corn disease, bacterial leaf streak, was detected in the United States.

Dr. El-Lissy is also responsible for the Agricultural Quarantine Inspection Program, which includes tracking emerging and new pest situations around the world, assessing pest risks and movements in trade, inspecting live plant shipments, and developing methods to reduce pest risk in trade and with the movement of passengers and cargo. In response to impacts from the COVID-19 pandemic, he and his team developed a cost management plan that will save $40 million this year alone, while still ensuring continuity of mission-critical services.

In addition to his work on trade issues, Dr. El-Lissy is successfully safeguarding domestic agriculture by preventing and eliminating plant pests and diseases from within the U.S. He led efforts to successfully eradicate European grapevine moth, protecting California’s grape crop valued at $4 billion, with a state-wide impact of $57 billion. He spent a substantial portion of his career combatting and leading efforts that eradicated pink bollworm, a cotton pest, protecting cotton production worth $27 billion annually, and was recognized for his contributions as a Finalist for the Samuel J. Heyman Service to America Medals in 2019.

More information about APHIS’ Plant Protection and Quarantine program is available at: https://www.aphis.usda.gov/aphis/ourfocus/planthealth.