“I am proud to say that we have eradicated Asian longhorned beetle from Brooklyn and Queens,” said Greg Ibach, USDA’s Under Secretary for Marketing and Regulatory Programs. “This officially marks the end of our 23-year long battle with this pest in New York City.”

The beetle was first detected in the United States in 1996 in Brooklyn’s Greenpoint neighborhood. A short time later, it was found in other parts of New York City and on Long Island. The pest most likely came to the United States inside wood packaging material from Asia.

To eliminate the beetle, APHIS and its partners regulated the movement of tree hosts, firewood and woody debris and carried out surveys to find and remove infested trees. In total, APHIS removed 5,208 infested trees and treated 67,609 at-risk trees. After completing final tree surveys last month, APHIS confirmed the beetle is no longer in Brooklyn and Queens. 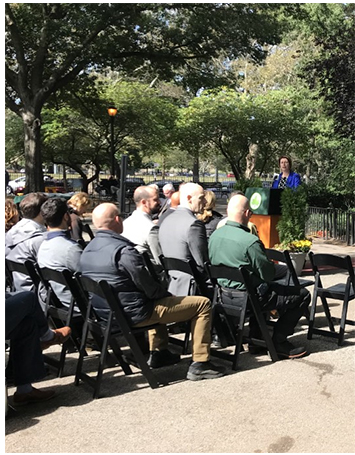 With this announcement, APHIS is removing quarantines covering 58-square miles in Brooklyn and Queens. This reduces the total regulated areas in New York State to 53-square miles in Nassau and Suffolk counties on Long Island.

ALB has no known natural predators in the United States, and it threatens recreational areas, forests, and suburban and urban shade trees. The beetle bores through the tissues that carry water and nutrients throughout the tree, which causes the tree to starve, weaken, and eventually die. Once a tree is infested, it must be removed.  The invasive pest has caused the loss of over 180,000 trees in Ohio, Massachusetts, New York, New Jersey, and Illinois.